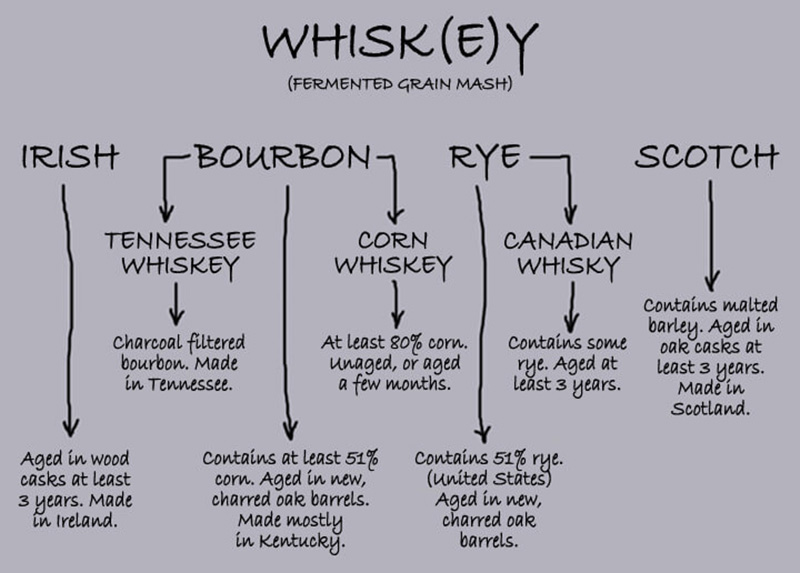 What is Scotch?
To qualify as a scotch the spirit must be made from malted Barley, with many scotches using nothing more than barley, water and yeast. You are allowed to include whole grains of other cereals as well as caramel colouring. No fermentation additives or short-cuts permitted.
The spirit must also be aged in oak casks for no less than three years, and must have an ABV at less than 94.8%. Finally, you cannot call your drink Scotch unless it was made 100% in Scotland, from Scotland.

What is Bourbon?
Bourbon whiskey must be made from a grain mixture which is at least 51% corn. The fermentation process for this mixture is often started by mixing in some mash from an older already fermenting batch, a process known as sour mash.
Much like how Scotch must be made in Scotland, Bourbon can only be labeled as Bourbon if it was made in the United States. While the rules are slightly more loose with Bourbon than with Scotch it still has to conform to a few requirements.
The spirit must be distilled to no more than 80% alcohol (160 proof) and be no more than 62.5% when put into casks for aging in new charred oak barrels. Finally Bourbon has no minimum aging period, but to call your product Straight Bourbon it must be aged for no less than two years.
Blended bourbon is permitted to contain coloring, flavoring and other spirits, as long as 51% of the mix is straight bourbon. The age on the bottle of blended bourbon must be the age of the youngest whiskey in the mix.

What is Tennessee Whiskey?
For all intents and purposes, Tennessee Whiskey is straight bourbon made in the state of Tennessee. The people who produce this spirit, such as Jack Daniels, don’t want their whiskey labeled as Bourbon, claiming that they are the only type of whiskey which puts the spirit through a charcoal filtering process.

What is Rye?
Rye is the trickiest of all whiskeys to define. The reason for this comes from a historical naming convention for Rye produced in Canada. Rye whiskey is not always made from Rye mash.
Canada has distilled Rye for almost as long as the country has existed, and historically the majority of the mash was comprised of Rye mash. But with no actual rules in place the spirit is now produced with a mash sporting a corn to rye ration as high as 9:1.
The only rule to label your whisky as Rye in Canada is for it to have some rye in it, and to possess the aroma, taste and character generally attributed to Canadian whiskey… whatever that is.

What is Irish whiskey?
Irish whiskey is pretty much any whiskey aged in the Republic of Ireland or in Northern Ireland. Like Scotch it must be distilled to an ABV of less than 94.8.
It must be made from yeast-fermented grain mash in such a way that the distillate has an aroma and flavor derived from the materials used. You are free to use any cereal grains, but if you mix two or more distillates it must be labelled as blended.
Finally, the whiskey must be aged for at least three years in wooden casks.